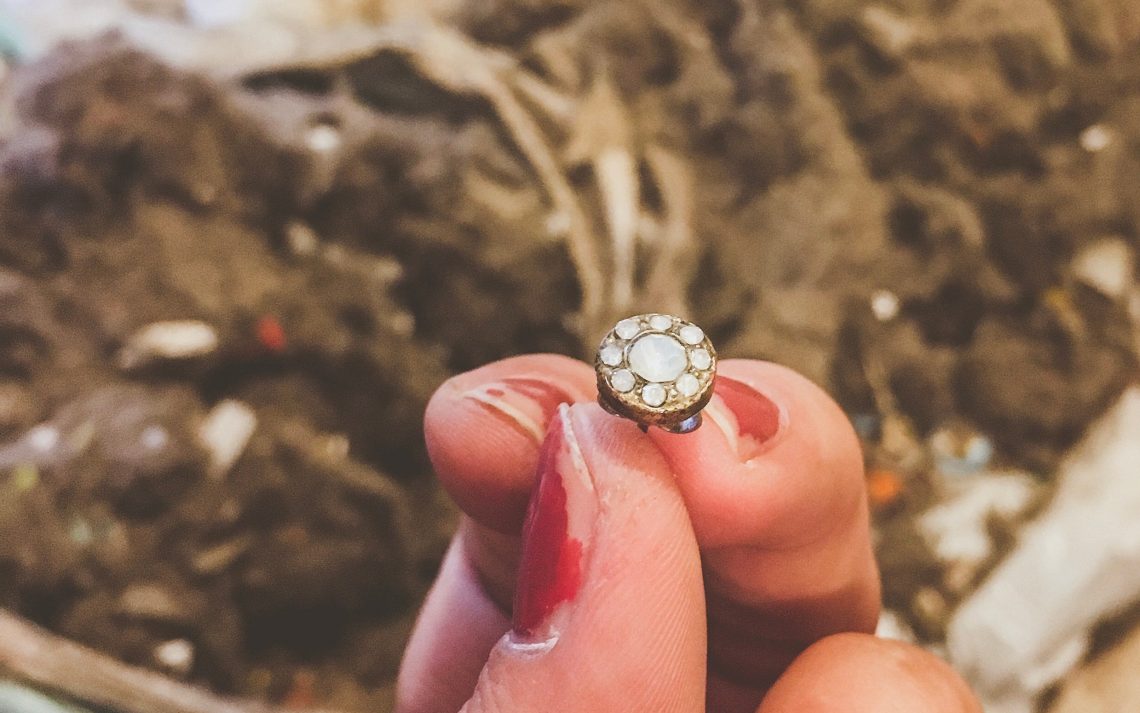 The sound of metal bits clacking around in the vacuum cleaner made my stomach drop. The earrings I had worn in rotation with a few of her other studs for the last year and a half were missing and now I knew where they’d gone.

She didn’t have many specific requests, but when my momma knew she was dying we talked about what she wanted. I have a recording of this on my phone and I can’t erase it even though when will I ever need this because you just save things when someone close to you dies. No new memories and all that.

After we talked about the depressing end-of-life scenarios she laid out very simple wishes for her stuff. She didn’t have much to bequeath, but she had obviously thought about it and wanted everyone in the family to go through her jewelry (mostly costume, but all so distinctly her) and pick out what we wanted to keep.

We laid everything out on Gramma’s table and went through it together. We remembered when she wore this bracelet or that necklace. We laughed at the absurd wooden earrings of a person being eaten by a shark (I am so sorry I don’t have a photo) and the myriad of Christmas tree pins. We handled her beloved Hawaiian pieces with care and said, “Oh I remember this” a hundred times.

I have babies so I do not wear dangling earrings (particularly ones involving murder-by-sea-creature), but there were several things I did want including a bunch of stud earrings she probably got at Target for $14.99/pack. They aren’t fancy or “real,” but they are really hers. Part of my morning ritual has become picking out some of her studs and putting them in just like she did. My ears are her daughter’s ears and that’s a nice thought to carry into my day. They keep me connected to her like some tiny hair-like strand between here and wherever she is now. I love that they are small, like whispers. But…. small they are.

Vacuums don’t give a f*ck that your mom died or that the tangible items you have of hers are precious few. Vacuums just suck. They suck dirt, they suck bits of food, they suck hairpins, they suck invaluable touchstones to your departed loved one.

I felt sick at the idea of losing another piece of her. My husband calmed me by reminding me that we could tear open the bag so I did. At first I poked around the top with a glove, moved around hair and beads and mangled paper.

I dug deeper. An hour passed. I began pulling everything apart, meticulously touching every last grain of fine dust packed tight in the (very full) vacuum bag. With increasing earnest, I called back what I’d removed with good reason from our environment. I sat on the floor as if before a witch’s brew and conjured the filth, begged it to bring me back my treasure.

Finally my deal with the dust-devils produced a shimmer, a hope, an earring! But just one. I kept sifting. 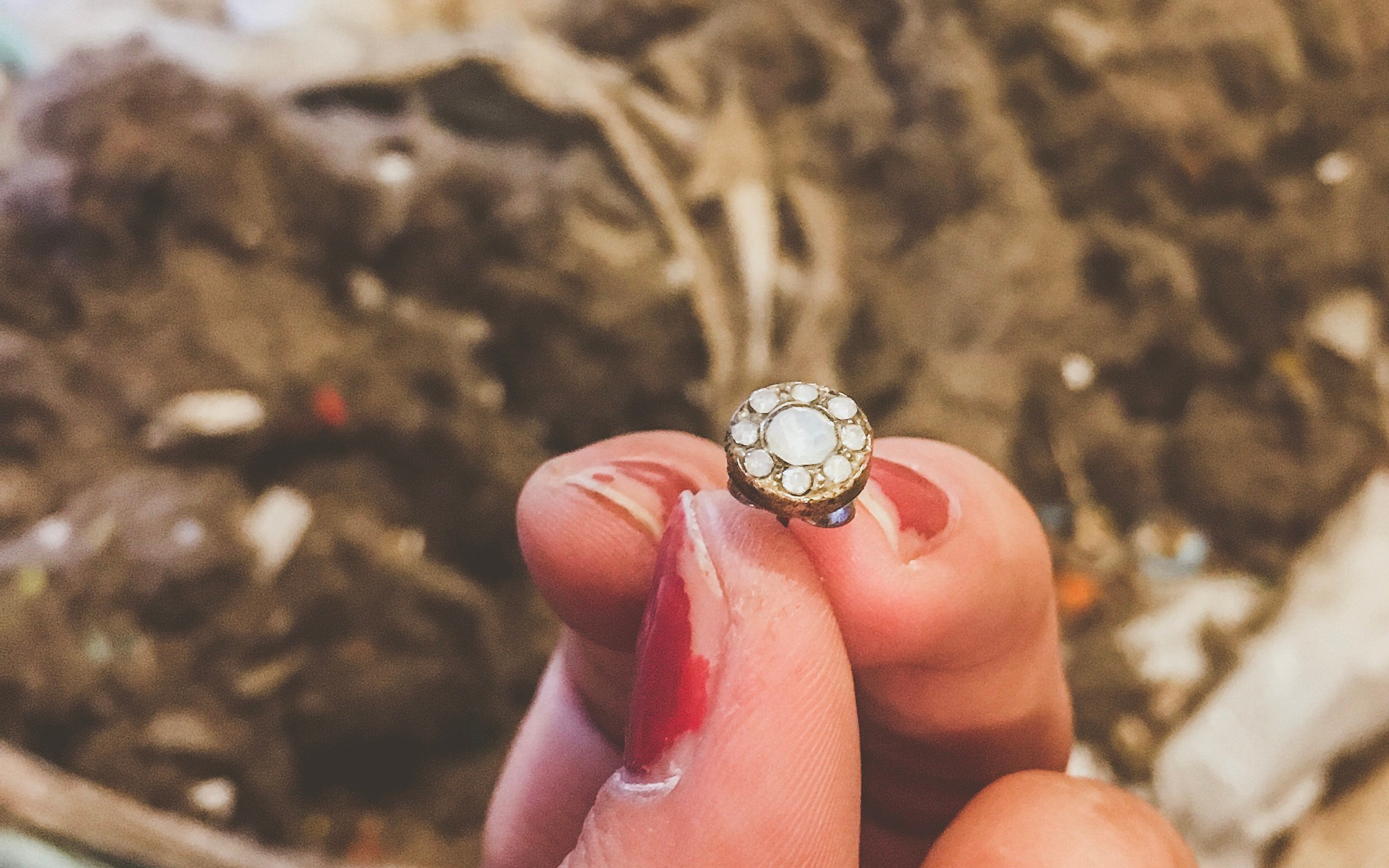 It was disgusting. I did not enjoy looking at the sheer amount of debris my family produced and it didn’t take long for the dust to irritate my nose, eyes, and lungs – my body reprimanded me for exposing it to toxins and tried it’s best to convince me to cut my losses. I did find a few other things: legos (which any mom will tell you are both despised and coveted because each piece costs approximately $349), bobby pins, a quarter or two.

After way too long for a face to be immersed in fine-particulate garbage I had to give up. I put everything into a trash bag and tied it up to visit again later.

Because I have no choice now but to mine what’s there or chuck out the gems. The last two years of my mom’s life were awful – brain cancer is a hell of a way to go and I mean hell – and there is too much left undiscussed, too many questions unanswered. Our time together is finite now, it’s done. It’s been sucked up into the sack of history which is only hypoallergenic if you don’t tear it open. But it’s what I’ve got so I go back to it and look for shiny things among the shit.

And I find them. Almost always.

But this is true even while life sucks, in the act of making history. There are areas of my life that are less than ideal. I don’t love that I can’t turn my brain off when it wants me to believe I have cancer or that I have one bathroom for 6 booties or that sometimes my husband seems like an actual alien to me, but this is my life. I am not looking for ways to sugarcoat the hard parts, I am looking for real gold here. In the obvious places and in the darkest caves. What else am I supposed to do? Abandon the treasure?

Death is singular in its permanence – there are no more chances to get something about your relationship right when someone dies, no more conversation, no more mutual understanding – but like everything else it has endless facets. Every single part of life is complicated. All of it. That thing you thought you tied up with a neat bow has undersides you haven’t even glanced at. Every experience, every relationship, every question is a cave that holds eternity. Another look can yield new reward or deeper grief; you won’t know until you stick your hand in there.

A day or two later my son ran through the house to find me exclaiming, “MOM! I FOUND IT!” He held the other earring up in the air like Charlie with his golden ticket. He’d spotted it in between couch cushions I knew I’d already searched and because he saw me hunched over a dust pile for hours he knew that what he’d found was important. I cried and hugged him and thanked him and he pushed out his chest with a big smile on his face, aptly proud of his heroism.

Because sometimes you don’t have to pore over refuse for shiny things. Sometimes they are delivered straight from the Source. 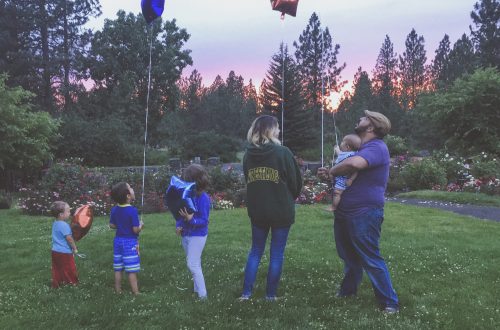 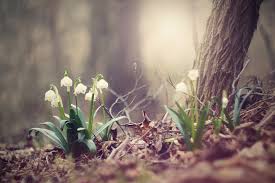 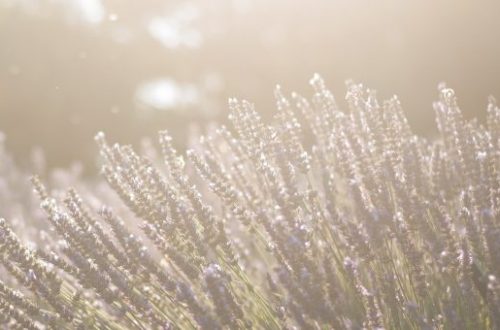